Burton and Varial Surf’s new “Resonator” is an aptly named addition to every surfer’s mountain quiver.

Jake Carpenter, founder of Burton Snowboards, whittled early snowboard prototypes out of surfboard blanks at a friend’s California factory. Bindings didn’t exist in the early days, and with the shapes and construction methods leaving a lot to be desired, bindings were an obvious choice for improving control.

Then, as the sport matured other technologies were adapted from the most abundant and dreaded source – the ski industry.

Bindings, steel edges, wood cores, press molding – all those elements of ski manufacturing are packaged into every snowboard sold today.

While many snowboard equipment designers never looked back, some in the sport never gave up on their early dream of truly surfing snow. From that diehard crew emerged the sport of powsurfing, also called Noboarding. The definition of powsurfing is pretty basic – snowboarding fresh snow without bindings. While this may sound super niche, in recent years it has become a significant backcountry movement and is quickly gaining momentum – most pro snowboarders now have at least one powsurfer in their quiver.

Burton’s longtime design guru, John Gerndt or “JG,” is a powsurfer. Having grown up surfing in New Jersey, he’s thought of several ways to incorporate elements of surfing into Burton’ snowboards – like fish tails and setback stances on shorter boards. But in the background he’s always been tinkering on ways to improve the bindingless powsurf experience. “I started without bindings from the beginning with the Snurfer back in the 70’s and I was hooked from there. I always had something bindingless that I was riding, but in 2001 when The Fish came out I really started to do it more and more. I have to hike for all my lines and turns and it’s not at a resort, so in many ways, this reminds me of surfing. It’s like paddling out at some remote spot where you don’t see another person.”

The problem with powsurfers, according to JG, is that they’re pressed like snowboards or skateboards and “when you ride them, that’s what they feel like.” In JG’s mind, the holy grail was a surfboard made for snow that could flex. When JG says a board can flex, he’s not talking about the subtle difference between a performance thruster glassed with single 4oz cloth versus 6 + 4oz.  He’s talking about real snowboard flex—the kind where it looks like the thing is about to taco in half. The problem with using traditional surfboard materials is obvious—any surfer can imagine the damage and destruction that would ensue riding their board over rocks and tree roots. 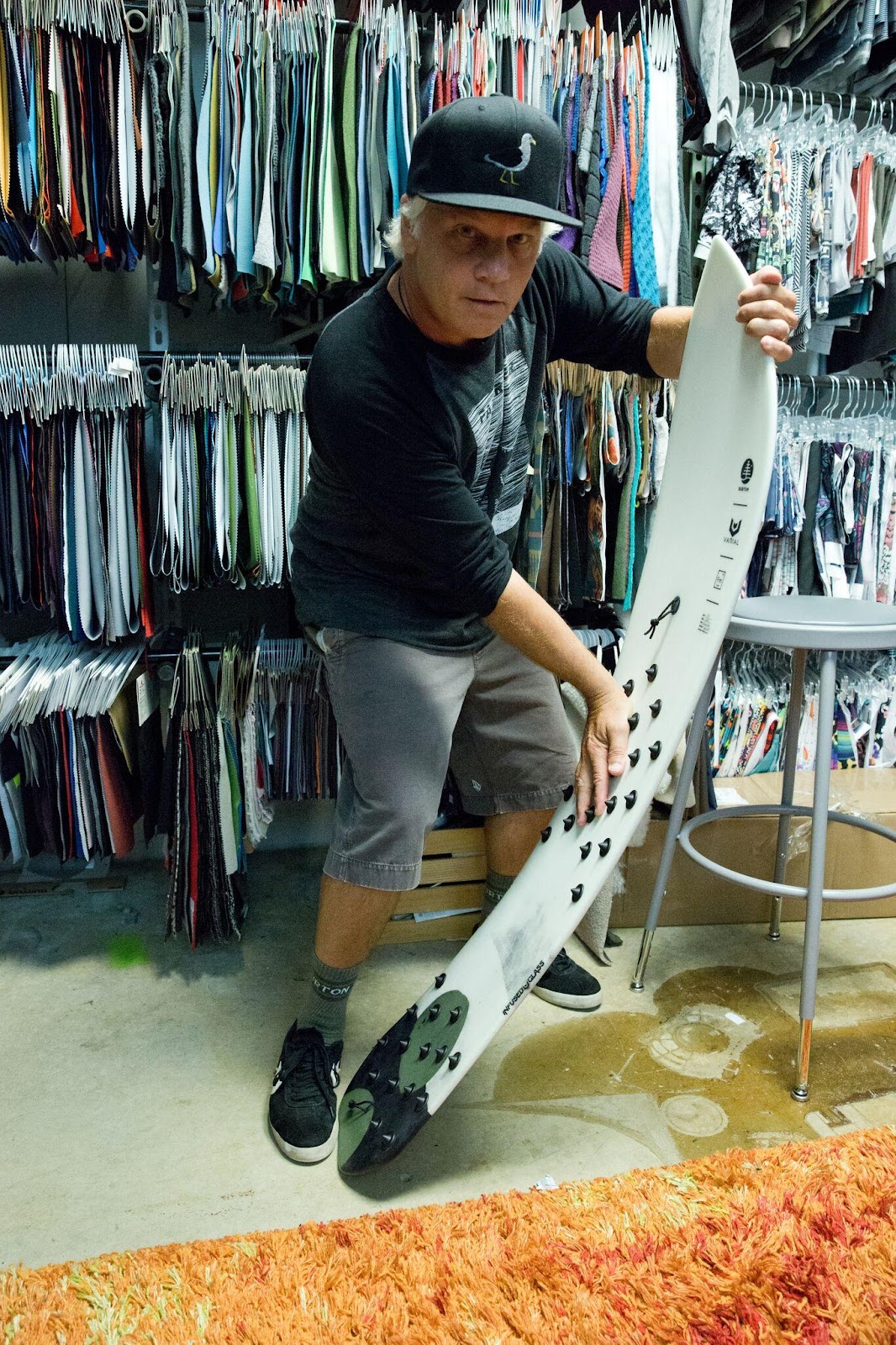 JG with a “board that can flex.” Photo: Tommy DeLitto // RL Photo

Enter Varial Surf Technology. “I had been keeping an eye on what Varial was doing within surf and with their technology and contacted them years ago. Then I saw a video of Edison standing on a foam blank that was not glassed and it was supported on the ends and it flexed like crazy but did not break. That was when I contacted them about using it in a snowboard or maybe a snow surfer. It’s one of those things that until you try it, you’ll never know if you can do it. I kind of had it going as a side project, but it quickly gained interest within Burton.”

Varial has made a name for itself in the surf world by adapting Varial Foam and Infused Glass technologies from the aerospace industry to surfboards. Their tech has been validated in everything from Barron Mamiya’s air boards to Shane Dorian’s jaws guns.

But making snowboards like surfboards introduces an entirely new set of challenges. The board would have to flex and meet the durability standards of the snowboard industry. They also needed to capture all the surfboard design elements JG was after, working closely with the engineering team at Burton to make sure the end result would be the board JG had been dreaming about.

The Resonator, as Burton dubbed it, landed at a mere 2.7 lbs – certifiably the lightest board (of any kind) the team had ridden.

After JG’s first day taking laps on it in the backwoods of Vermont, he was sold. “We were really going for the feeling of surfing on snow, which I think we accomplished. The board is fast, agile, and responsive – it’s like riding a high-performance shortboard. The main reason is that the Resonator is made like a surfboard at Varial’s factory. I’ve had lots of people on the Resonator who’ve ridden plenty of powsurfers and everyone says the same thing – they’ve never felt anything like it. It’s not just the materials, the shape has a lot of surfboard elements in it. It has full round rails up front transitioning to a hard edge through stance and out the tail. The board has deep belly channels that funnel snow for extra drive and control. You stand all the way back on the tail. It’s different than anything on the market.” 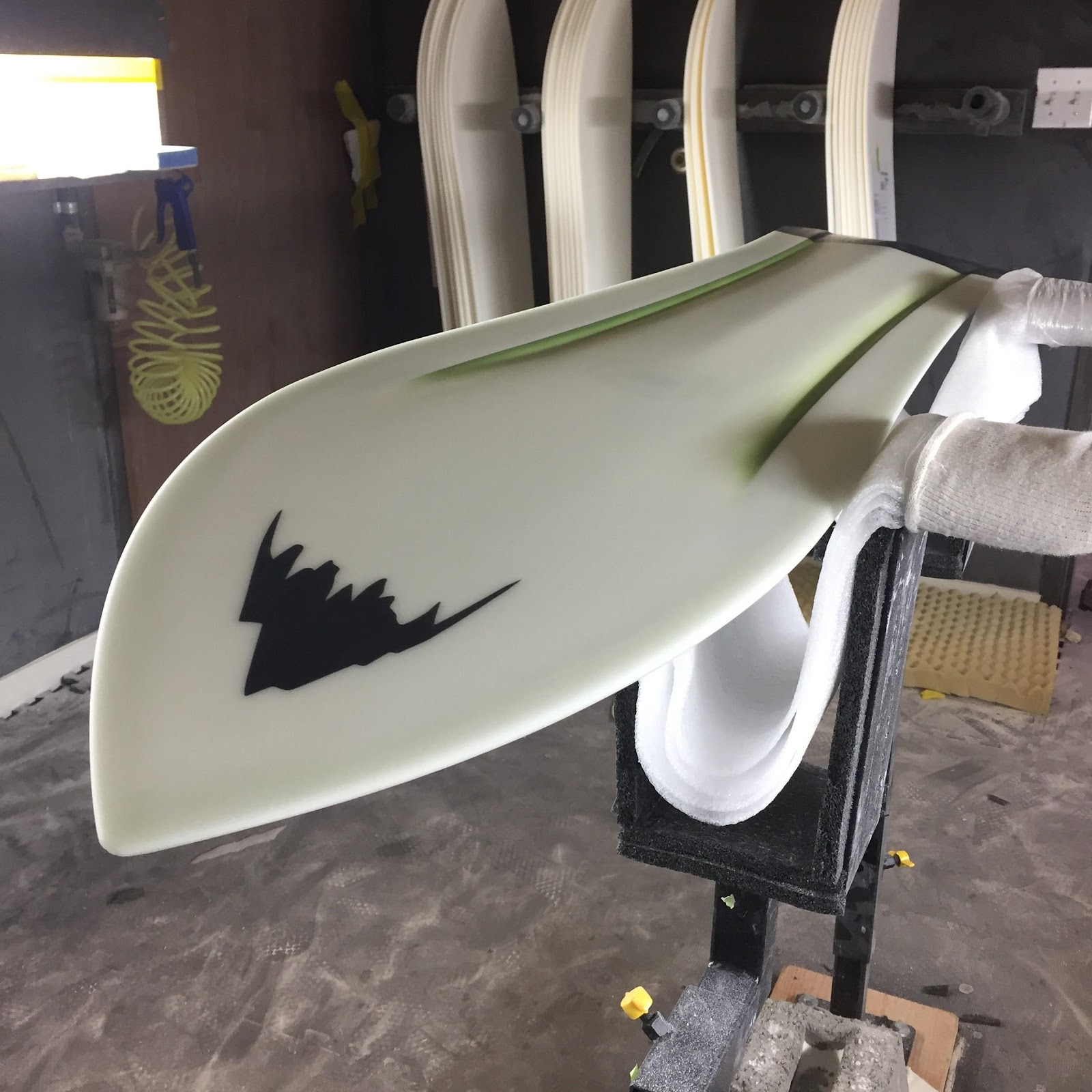 The Burton team riders are frothing. Watch the edit that the Varial crew put together and you’ll see why. It looks fun and rippable, not to mention if you’ve got it in proper conditions you’re already having a great day. A lot of the riders on Burton’s team surf, and in JG’s words, “they get it.” Brock Crouch rode for the US Surf Team. Mark McMorris dates Coco Ho. The list goes on.

Red Gerard was hot off a 2018 Olympic gold medal victory in Slopestyle when he flew to Baldface and was one of the chosen few to test the first Resonator proto. Baldface is Tavarua for snowboarding—if you can imagine 32,000 acres of untouched British Columbian powder in place of throaty tropical barrels. After landing a bindingless Indy Tweaker going about 50 mph, Red asked JG “In these conditions what’s the point of strapping in? Why don’t we all just ride these things?” 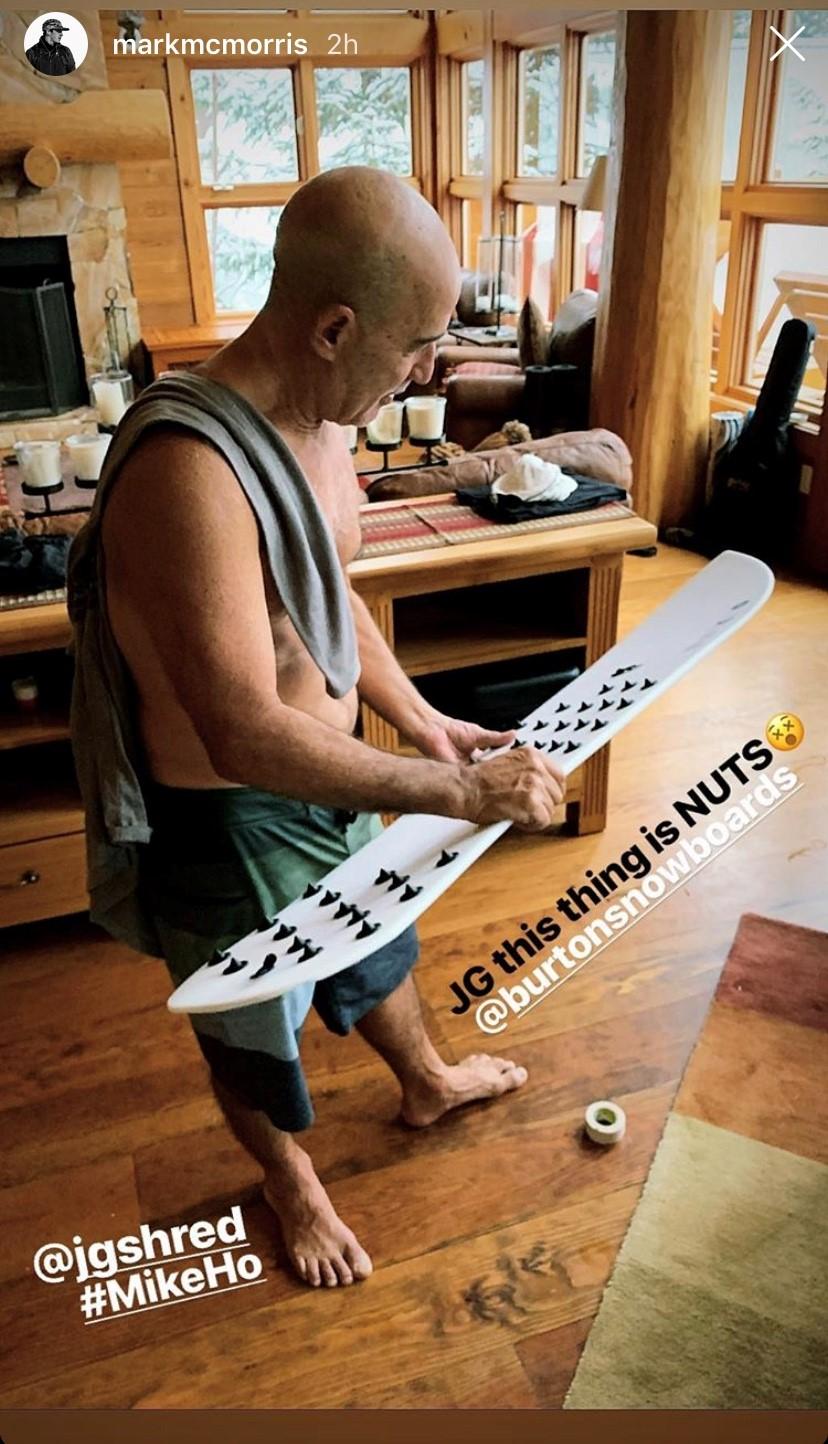 So what does the future hold for this cross-sport collaboration? Will bindings go the way of straps in big wave surfing? Something that was once considered a necessity giving way to improved equipment and skill even in the gnarliest conditions. Or will surfing snow take on its own life as a liberating, style-focused alternative to the high-flying rotational antics of those who choose to clamp their feet to their boards? Rip a few turns and find out for yourself.

Unlocked: ‘Nozvid’ In All Its Glory

How To Watch The Vans Pipe Masters

With less than 24 hours to go, we've put together a complete list of rules…

Our quest to objectively establish the best men's suit, women's suit, and booties out of…

But he's gotten an invite to the 2022 Vans Pipe Masters, so we caught up…

The rise and rise of Mrs. Pipeline.

"Bull-riding is such a great warmup for surfing big waves."

Guess Who Else Just Got Invited To The Vans Pipe Masters

What’s Happening To Orange County’s Sand, And Is It Worsening The Waves At Lowers?

Read this to upgrade your understanding of your local beach break and coastal environment.

After seven events and much groveling, 10 men and 5 women will officially be CT…

An Ode To Aussie Chick Pros From The Nineties

Update: John John Flushes Everyone Down The Haleiwa Toilet Bowl

And the CT qualifications for 2023 are set.

Riaru Ito Is Cooler Than His Cucumber Garden

Meet our passion pick for the Vans Pipe Masters.

How Surfers Get Paid, Episode 4

The energy drinks are here. They’ve got millions of dollars, and they want your head.

Quiksilver's newest film made landfall in Encinitas, and we were there to document the occasion.