Dane Reynolds Is Starting His Own Wetsuit Sub-Brand

Ocean and Earth Has Spent a Lifetime Perfecting the Leg Rope

How To: France, Spain, And Portugal By Van

Yesterday, for the first time in its 60-year existence, Surfer Magazine officially endorsed a Presidential candidate.

As you might imagine, the post received a mixed response from the internet (we won’t get into that shitshow here). 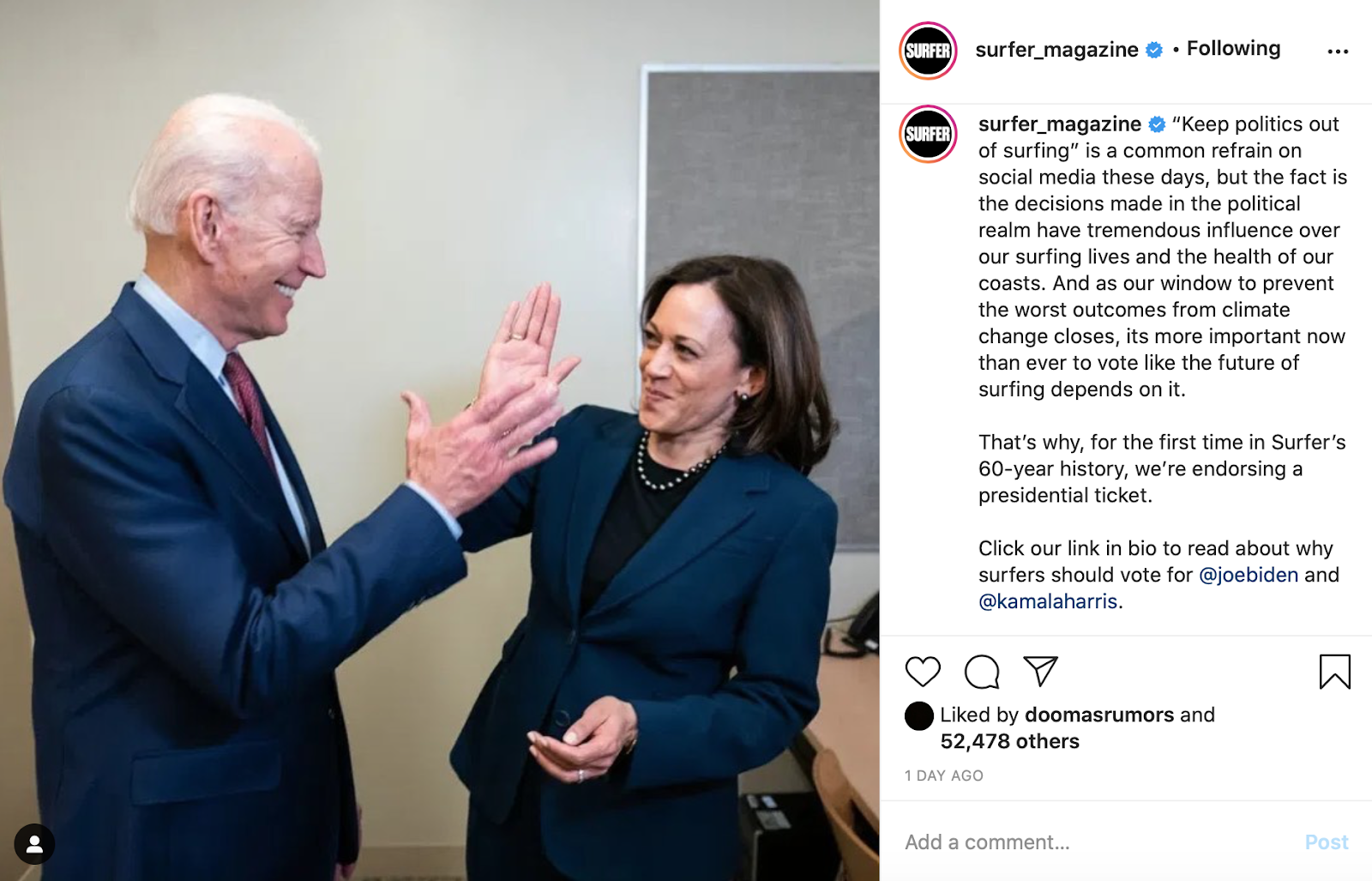 “Keep politics out of surfing” is a common refrain on social media these days, but the fact is the decisions made in the political realm have tremendous influence over our surfing lives and the health of our coasts. And as our window to prevent the worst outcomes from climate change closes, its more important now than ever to vote like the future of surfing depends on it.

That’s why, for the first time in Surfer’s 60-year history, we’re endorsing a presidential ticket.'

Today, it has been reported that Surfer’s entire staff was furloughed by its parent company, American Media, and that the magazine has been temporarily shut down.

As in, Surfer Magazine, the “Bible of our sport”,  is no more, for now.

About a year and a half ago, we reported that Surfer Magazine had cut half of its staff in anticipation of a corporate takeover. The original parent company (The Enthusiast Network) was selling all of its various media entities to American Media, and part of that deal included trimming the staff that worked in their Carlsbad HQ.

So who is American Media? Well, as of August 2020, they’re now called A360Media—sister company of Accelerate 360, a distribution giant that deals in just about everything, but specializes these days in products like face masks and hand sanitizers.

According to the ‘About me’ tab on AMI’s (aka A360Media’s) prehistoric landing page: “(AMI) owns and operates the leading celebrity and health & fitness media brands in the country. Our magazines have a combined total circulation of 2.3+ million and reach 47+ million men and women each month. Our digital properties reach a total of 60+ million unique visitors and 762+ million page views monthly.”

Some of AMI’s major titles include Men’s Journal, Us Weekly, In Touch, plus action sports labels Bike, Powder, Snowboarder, TW Skate, and of course, Surfer.

Up until April 2019, AMI owned the National Enquirer.

Interestingly, AMI’s recently departed CEO, David Pecker, was the one who helped Trump funnel hush-money to Stormy Daniels and Karen McDougal in order to “kill” their stories about his sexual infidelity. While Pecker has stepped down as the CEO of A360Media, according to an inside source, he is reportedly still pulling strings under the title “executive adviser”.

We know that the August issue of their quarterly magazine was clipped as far back as a month ago, which was perhaps indicative of end times. However, people inside the staff might have assumed the title would go completely digital rather than being shut down.

This would imply that yesterday’s political post involved a great level of risk for the entire staff, and perhaps influenced AMI’s decision to kill the brand.

Another possibility is that Editor in Chief Todd Prodanovich knew AMI was going to shut down Surfer and used the Instagram post as a pre-mortem mic drop. Like, “If Surfer is going to die, it’s going out with a bang.”

In fairness to Todd and crew, yesterday’s endorsement was more a public crystallization of their long-standing brand values than it was a groundbreaking political statement. Anybody who’s read Surfer’s site/mag for the past five years knew exactly what they stood for, and it certainly wasn’t Trump.

Regardless of what the Surfer staff did or didn’t know regarding their termination (and how that related to their publishing of an official Presidential endorsement), we’ve heard from an inside source that the Surfer brand was slated to be extinguished no matter what, and that it was purely by chance that this culling coincided with yesterday’s post....however unlikely that may seem.

It’s also rumored that another wave of AMI layoffs and brand terminations will occur in late November. Titles such as Powder, TW Skate, Snowboarder etc. could be on the chopping block.

Less speculative info will filter in over the coming days, but "American Media don't play," a source tells Stab.

In the meantime, we’d just like to say RIP to Surfer Magazine, and to thank them for everything the storied mag cataloged.

Going Switch Is The Antidote To Apathy

Has Anyone Seen This Man?

Catch One Of Ventura’s Top Talents At The Checkout Counter

Dane Reynolds Is Starting His Own Wetsuit Sub-Brand

Ocean and Earth Has Spent a Lifetime Perfecting the Leg Rope

How To: France, Spain, And Portugal By Van

Stop What You're Doing And Watch: Chippa Wilson's Epøkhe Part

Watch: Is URBNSURF Melbourne The Best Wave Pool In The World?